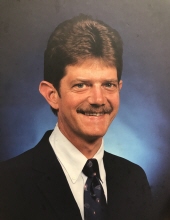 Travis was widely known in the tri-states area to be THE parts man from his years "behind the counter" at Swearingen Equipment Company.  His knowledge of farm equipment and anything mechanical was extensive.  His customers were his friends.  He never met a stranger. He was always willing to help and gave away more than just advice to anyone who needed it.  He told big stories loudly and laughed at the same volume.  He was an excellent writer and orator, winning several levels of the Optimist Club oratorical contest in his younger years. He regularly spoke on farm equipment safety after losing his right arm in a farm equipment accident. That heroic story being one of his best and most enthusiastic recantations. He passionately loved his children and his pride in them was widely known.  He willingly shared photos of his grandkids and bragged about how smart they were.  He cherished his mother and took good care of her, as she did him.  He loved his sister and regularly teased her about how she abused him until he got bigger than her. He loved deeply.

He was preceded in death by his daughter, Courtney Elizabeth Bright and his father, Charley Travis Bright.

The family will receive friends from 2:00 pm until service time.

Travis, like many,  struggled with a lifetime of addiction.  The family appreciates all of the years of support to Travis and each member of his family.  In honor of his passion for the men and women who struggled with him, and the organization who helped him confront his shortfalls, the family requests those who would like, to make contributions in memory of Travis Bright to: The Panama City Rescue Mission 609 Allen Avenue Panama City, FL. 32401.

Add Your Own
Dear Bright family. I am so very sorry to have read of the recent death of your loved one, Travis. Please accept my sincere condolences. I would like to share something that I have personally found to be very comforting. It is found in the Bible at John 5:28,29 and also Revelation 21:3-5. These verses tell us that soon God is going to bring about a resurrection of our dear loved ones, as well as do away with all of the many causes we have for suffering, including sickness, pain & death. Knowing this has always brought me some comfort and it is my hope that these thoughts from the Bible will likewise comfort your family and will also ease some of your great pain during this most difficult time in your lives.