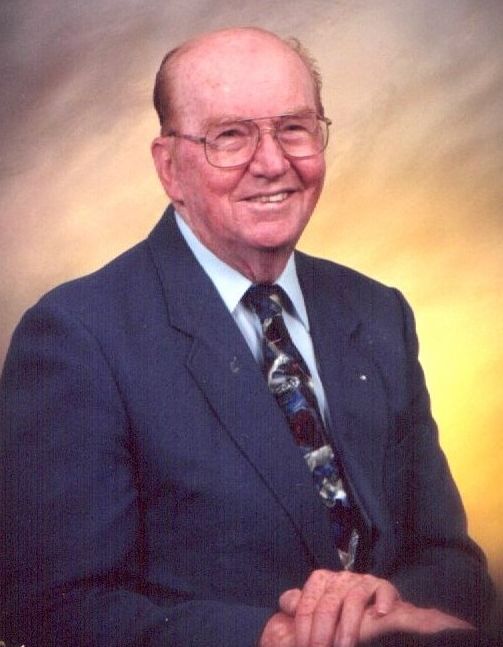 Mr. Horace Leonard Chandler, age 89, went home to be with the Lord on July 28th, 2017.  He was born on September 15th, 1927 in Hartford, Alabama, the son of the late Randall and Floyd Myrtle Chandler. He attended the public schools of Geneva County, Alabama graduating from Geneva County High School in 1945. He dedicated his life to the building of God’s Kingdom on this earth and leading many to faith in Christ as their Lord and Savior.  He was a member of the Hartford Baptist Church, Shiloh Baptist Church and Memphis Baptist Church. He served the church in many ways including Minister of Music, Youth Minister, Deacon, Royal Ambassadors Director and Sunday School Teacher.  As a result of his generous spirit and pleasant personality, he was loved by many including the many, many youth who he led to Christ.  He was united in holy matrimony to Mary Charles Howell, the daughter of Ernest and Nell Howell, on September 18th, 1948 in Donalsonville, Georgia. This union was blessed with two daughters – Susan and Marsha.  Mrs. Chandler preceded him in death on July 27th, 2013.  Mr. Chandler worked for many years for the U.S. Department of the Army in the field of data processing and information management at Fort Rucker, Alabama and Fort Stewart, Georgia.  He retired with honor as a senior civil servant and the Director of Information Management at Fort Rucker, Alabama.  After retirement, Mr. Chandler tried his hand at farming in the Hartford, Alabama area for several years.  After his final retirement, he dedicated the remainder of his life to his wife, his children, and his youth and to the church.  He was preceded in death by his sisters, Grace Brown, Joy Straughn, Juanita Batchelor and Ann Wells and brothers, David Chandler, Huey Chandler and Dewey Chandler and his beloved grandson, Shane Stading.  His incredible life will forever be cherished in the lives of his children, Susan Foster and her husband Don Wilson; Marsha Eggers and her husband Bill; grandchildren Scott Shirley and his wife Celeste, Katie Rebideaux and her husband Joe; great granddaughter Kayla Shirley; and many nieces, nephews and cousins.  Special appreciation and love to niece Diane B. Sanders and husband Roger who was always there for him in his time of illness.  Funeral services will be held at 10:00 a.m. on Monday, July 31, 2017 at Hartford Baptist Church with Reverend Bruce Spivey and Reverend Jason Enfinger officiating and Sorrells Funeral Home & Crematory directing.  Interment will follow  in the Hartford City Cemetery.  The family will receive friends at the funeral home Sunday from 6:00 until 8:00 p.m.  In lieu of flowers, memorial donations may be made to the Hartford Retirement Village in honor of the staff, caretakers and residents who have been such an integral part of his life over the last year.

Susan, Marsha & families:
Words can never express the deep love & respect we have for your dad, our friend and brother in Christ. He made a profound impact on our lives when he was on staff at Shiloh. I was secretary at Shiloh and He & your Mom gave me, on Secretary's Day on April 26, 1991, a perpetual calendar which I am presently using called Heart Warmers with the card, "For a Great Secretary The Leonard Chandler's We Appreciate you." He was such an encourager. He also made a profound impact on our son, Chad's life with his direction as Youth Pastor also at Shiloh.
Please know our heart filled sympathy is extended with many prayers for God to comfort you all in his leaving to go to his eternal home that he has worked so hard in sharing with others, so that they may go there also. And to see Jesus "Face to Face" his eternal heavenly Father and his soul mate & love of his life, Mary Charles. Blessings, Sammy & Brenda.
So sorry for your loss. We dearly loved Bro. Leonard. We are so thankful that he was our children's Youth Pastor.
Our sincere condolences to the entire Chandler family. "Red" is the individual who employed me some 55 plus years ago and brought me to Hartford. We had several years of close relations before we gradually grew apart for really insignificant reasons. I can still thank him for much of what I have attained. I would so love to be at visitation, but a major no-no of my cancer Doctors is large crowds, which will certainly true of tonight. We will be in prayer for the entire family, and will remember all with respect and love. Sincerely. Don and Jo
Ann Wilson.
I will miss you Leonard but I will never forget you. Your little sister, my mother Joy, loved and admired you. When my brother Sam and I would come with her as children to visit, you treated us with such love and acceptance. I can remember summer evenings with you, Mary Charles, your sisters and kids.....eating home made ice cream, playing canasta, Yahtzee, ping pong, watching baseball, and riding with you on your tractor. I cherish these memories and I only hope that the man you were in life will by example help make me the man I want to be.
God bless you Leonard.
Your nephew,
Randolph
We want to give our deepest condolences to the Chandler family. He was responsible for bringing me to Hartford some 55+ years ago. We enjoyed a long working relationship and personal friendship. Joann and I would love to be at the visitation and funeral to celebrate his life but my health will not allow that at the current time. Sincerely Don and Joann Wilson.
My precious cousins Marsha and Susan ;
You are more sisters than cousins and your Daddy my uncle Leo was more Daddy than uncle. Thank you for sharing him with all us all these years. You know how important he was in our lives and we certainly understand what has been lost to his remaining friends and family!! My heart aches for you. 2 Corinthians 1:3 " praise be the God and Father of our Lord Jesus Christ, the Father of tender mercies and the God of all comfort" . We certainly know what it was like to be comforted by your father. This scripture paints for me a vivid picture I can relate to thanks to my life with Uncle Leo in it. I pray you will feel the comfort promised in scripture each time you face painful memories or loneliness . I love you dearly.
Dear Chandler Family,
I am writing to extend my condolences. Mere words cannot convey the feelings of disbelief and sorrow that result from losing someone you dearly love. Please do not dismay, for God has a purpose for those who are sleeping in death.
In the book of John 5:28, 29 Jesus says, All in the memorial tombs will hear his voice and come out. Yes, your dear loved one will live again, so don’t think of your loss as permanent. Also, Ecclesiastes 9:5 says that, the dead are conscious of nothing at all. How comforting to know that our dear loved ones are not suffering!
It is my sincere hope that you get a great measure of comfort from the Holy Scriptures.