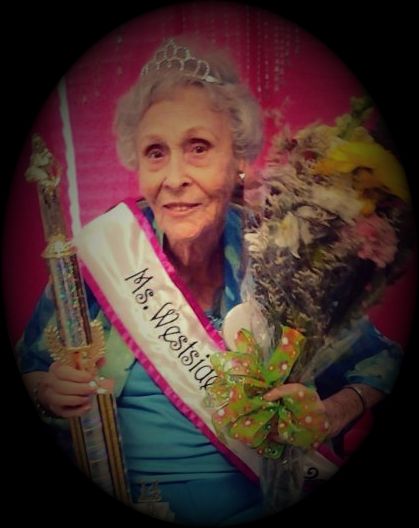 Mrs. Delma Thweatt Santora was born April 27, 1919, in Slocomb, Alabama and passed away October 14, 2015 at Flowers Hospital  following a short illness.  She was 96 years young, a devoted and loving mother, grandmother and friend. Mrs. Santora was a long time resident of Slocomb and current resident at Westside Terrace in Dothan. She was a member of the First Baptist Church of Slocomb for many years.  Mrs. Santora was blessed to have her family and friends around her during her last days and will be greatly missed.

Funeral services will be held at 3:00 p.m. on Sunday, October 18, 2015 at the First Baptist Church of Slocomb with Rev. Coley M. Holloway, Rev. Carlisle Weed and Rev. Dicky McAllister officiating. The family will receive friends at the church from 1:00 p.m. until service time. Interment will follow in the New Teamon Baptist Church Cemetery with Sorrells Funeral Home & Crematory of Slocomb directing.

Flowers will be accepted or you may honor Mrs. Santora's memory with contributions to the First Baptist Church of Slocomb, P.O. Box 428 Slocomb, AL 36375.

Mrs. Santora’s family would like to extend a special thank you to the doctors, nurses and staff at both Westside Terrace and Flowers Hospital for their kindness and superb care given to their mother throughout her time with them, especially during her last days.

Mrs. Santora is so very special to us. She was such a kind, generous and classy lady. She made us feel like family from the minute we met. She invited us to sit with them when we first started going to church at First Baptist. We sat with her from then on until she moved to Westside Terrace. She will be missed so much.
So sorry for your loss! loved her and her husband very much! Such kind and sweet lady! She will be greatly missed! But at least she is with her sweet husband in Heaven! My thoughts and prayers are with your family during your time of loss!

Lynn and family, I am so sorry to hear of your grandmother's death. Cherish your memories of her. My prayers are with you and all of your family. God Bless, Sybil Glover

Dear Janice,
I know you will miss your dear, sweet, Mother. She was such a beautiful lady. Please know that I will remember you all in my heart and prayers as you celebrate a wonderful life well lived.
Thoughts and prayers go out to your family in the loss of your mother. Praying that God's comfort and wonderful memories of her will help you through this difficult time.
Our thoughts and prayers and with your family at your time of grief.

I sure will miss her. she was always teasing me about taking Winston away from me. she was a beautiful southern lady. My thought & prayers are with the family. so sorry for your loss.