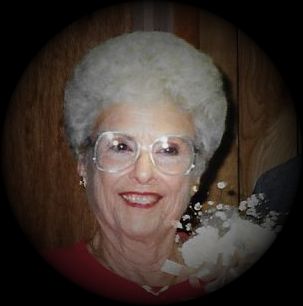 Mrs. Flinnie Morrow Peters of Wicksburg went home to be with her Lord Friday, December 5, 2014 at her daughter's home surrounded by her loving family.  She was 87.

Funeral services will be held at 11:00 a.m. Monday, December 8, 2014 at Goodwater Free Will Baptist Church with Rev. Buddy Hood officiating and Sorrells Funeral Home & Crematory of Slocomb directing.  Interment will follow in the church cemetery.  Mrs. Flinnie will be placed in the church one hour prior to service time.

The family will receive friends at Goodwater Free Will Baptist Church Sunday, December 7, 2014 from 2:00 until 5:00 p.m.

Flinnie was born May 24, 1927 in Geneva County to the late Herbert and Rossie Fleming Morrow. She was a member of the Goodwater Free Will Baptist Church. Flinnie was a proud housewife and a loving mother, grandmother, great grandmother, sister and friend and will be dearly missed.

In addition to her parents, her husband, Rudolph Peters; sisters: Pearl Martin and Jewel Henderson; brothers: Wilford, Clayton and Harold Morrow preceded her in death.

The family would like to express their sincere appreciation to CareSouth Home Health and Covenant Hospice and the many friends for the love and concern shown during this trying time in their lives.

Add Your Own
We are so sorry to hear of Ms. Flinnie's passing, she was a Wonderful, Sweet, Christian woman...We know she will be greatly missed.
I'm sorry to here about your loss. She was a wonderful person she will be dearly missed. The family will be in my prayers. God Bless.

I am so sorry to hear of the passing of Mrs.peyers the end of an era. She was such a nice woman that I greatly admired. Joann and Margret my thoughts and prayers are with you and your family during this time.

Joan, Margaret, family, my Mother( Sally Hinson Norton)shared a room together for a while with your Aunt Jewel.. My family loved your Aunt and your Mom . Your Mom was still so beautiful. My family is so sorry for your loss of Mrs. Flinnie. Praying for comfort and peace for all of you. God Bless each and every one of your families. I truly believe God picked one of the best when he called your Mom home.Love and Peace. Barbara Dale Deese