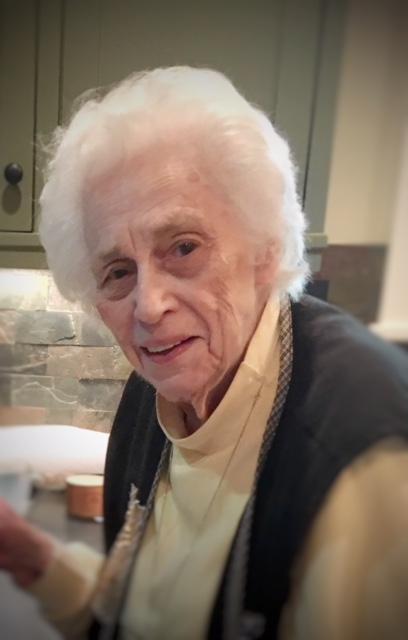 Doris Ellen Bryan Williford—born in Slocomb, AL, on August 29, 1922—passed away on Monday, February 18, 2019, surrounded by her loving family at the Arbor Springs Health and Rebab Center in Opelika, AL.   She was preceded in death by her husband Frank; her parents Henry and Mary Elizabeth Bryan; three brothers James, David Earl, and Calvin; and her sister Ann Henderson Johnson.  She is survived by her daughter Maureen Deery of Auburn, son-in-law Pat, brother Don Bryan (Flor) of Columbus, Ga., sister-in-law Frances Bryan also of Columbus, two grandchildren Evan Deery (Susan Poweski) of Atlanta and Stacey Laverick (Jack) of McDonough, Ga, and numerous nieces and nephews.  Doris, or Grandmama as she was affectionately known, and Frank, a World War II veteran, were married 67 years.  She was a consummate homemaker, worked in retail for most of her adult life, and was known for never having spoken an unkind word.  Her kind and generous spirit shown through to all those she met, and she will be remembered as a devoted and loving mother, grandmother, sister, and friend.  A devout Christian, she was a member of the Malvern, Ala, Methodist Church, serving as the secretary-treasurer, and a charter member of the Grace United Methodist Church of Auburn.   She will return to her long-time home of Malvern with a visitation at 1:00 p.m. on Friday, February 22, 2019 at the Sorrells Funeral Home in Slocomb, AL, and a grave-side service, conducted by Rev. Hosea Parker, at 2:30 p.m. at the Malvern Baptist Church Cemetery in Malvern.   The family thanks the many dedicated, supportive, and loving caregivers at The Harbor, Arbor Springs of Opelika, and Compassus Hospice and the physicians who have assisted with Grandmama’s care and especially Mary Thomas, Dorothy Butler, Lettie Jones, Doris Hutchinson, and Ashley Jacobs.  In lieu of flowers, please consider donating in her honor to Compassus Hospice of Auburn, Alabama or the Malvern Baptist Church, Malvern, Alabama.

Add Your Own
I'm so sorry to hear about your loss. You have my thoughts and prayers. I have no doubt she is in the arms of our Lord.
Jackie B Cooper
Sincere Condolences to the family and friends of Mrs. Doris Williford. She was genuinely loved by all and definitely had such a giving heart throughout her life. Losing someone that was so close and dear to us is so tough but you can make it through. To help anyone who may feel no one can understand their feelings of grief or help them Matthew 6:26 sates: "Observe intently the birds of heaven; they do not sow seed or reap or gather into storehouses, yet your heavenly Father feeds them. Are you not worth more than they are?" God sees each and every one of us and cares for each and every one of us way more than the billions of birds in creation. Hope this is comforting for all who may read this.